Celebrating 71 years of sweetness at the Rainbow Confectionery

Imagine a moment of therapy.

Did your mind conjure up a New Yorker style cartoon of a patient lying on a couch and bespectacled therapist looking at the clock?
Thought so.

And yet, closer to home, Rainbow Confectionery—a far cry from the psychoanalytic stereotype—has played an integral role in New Zealand’s happiness. Easter, Halloween, Christmas, or just because, there’s nothing like a sugary treat to release those bubbly brain chemicals that leave us looking on the bright side of life—if only for a moment.

The 17th of November 2020 marks 71 years of uniquely kiwi lollies being produced in Waitaki’s own backyard.
The Otago Daily Times marked the occasion in 1949 writing,

The new factory at Regina Confections, Ltd., at North Ōamaru, which will ultimately employ 35 men and from 35 to 40 women at a payroll of approximately £500 a week, was officially opened yesterday morning.”

The Mayor, M. F. E Cooney, expressed hope at the time that the opening would be the beginning of an era of prosperity and progress for Ōamaru.

Nowadays, folks come from all over to stop at the famous lolly locale and post-lockdown Rainbow Confectionery is seeing even more traffic than usual.

The factory is currently in the throes of Easter production which means extra hands are needed. Around 40 students are employed seasonally, alongside a full-time staff of 80, and the factory takes pride in the financial assistance of future doctors, teachers, and engineers.

It doesn’t matter what age you are, as soon as you step foot inside Rainbow Confectionery’s factory shop you’re giddy with possibility. How can you choose between the classic Airplane and the juicy Peaches and Cream. And, let’s not forget about the original Pineapple Chunk!
Yes, we’re all kids in a candy store.

So, here’s to 71 more years of Rainbow Confectionery keeping our hearts and happiness in mint condition. While the human kingdom froze their travel plans during lockdown, NZ’s iconic wildlife never stopped going with the flow. In fact, the Ōamaru Blue Penguin Colony has been given opportunities to spread its wings (well,

Celebrating 71 years of sweetness at the Rainbow Confectionery

Imagine a moment of therapy. Did your mind conjure up a New Yorker style cartoon of a patient lying on a couch and bespectacled therapist looking at the clock? Thought so.   And yet, closer 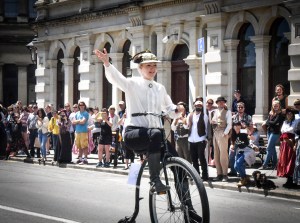 Victorian Heritage Celebrations 2020 are just around the corner…

Do you think it’s possible to travel into the past? Stephen Hawking thought so.   Scientists across the globe have long debated the bending of space and time, the paradoxes, and the mechanics, and while